← 3-1 At Dragons Lair: Trinity Will Dare Not Despair You S4C
Get Your Coat Mr Holdsworth – Simmo & Grant Please →

Up Your Game – Time To Save The Mighty Imps

Lincoln City is in deep, perhaps irreversible and  terminal decline. Those who voiced concerns have been neatly sidelined along the way by those entrusted with a priceless local institution we hold dear.  The fans are divided,  though in truth they have been split by skilled forces that are the smoke filled committee rooms that Chris Sutton referred. Forget relegation, Ebbsfleet, Barrow and Telford are all but down and Nuneaton will only escape if Gateshead cannot make good on games in hand.  It will not happen, there are 4 sides far worse than even our latest, to be fair, not that half talented batch, now beset with the dispirit that creeps up on a Lincoln City player like a winter chill to ageing athletic bones.  It gets to the managers too, but the non disclosure and legal red-tape that comes with a pay-off ensures nothing ever comes to light. So what to do?

Simply this and, even if Holdsworth does get the push this week, sacrificial lamb style, it should still continue. Those at the heart of the politics must put the cause first instead of championing themselves for mini deeds, that will do little to change what is happening at the club.  No more Trojan horse tactics, back each other if you want to get your message across. Be united, pardon the term, for City’s sake, if you want to get your message across.  Fan politics, you see, has done as much to alienate fans and allies as the standard of football and, naturally the regime; leading to all those empty seats.

Was the fans v board meeting ever shown? No. How was that allowed to happen along with 1,000,000 Trust shares going south (plus other issues)? Of course,  those that would ask the questions were banned from Sincil Bank and therefore absent from the meeting. With just the usual faces there and, votes in their pocket, no one could force a vote of no confidence let alone get some answers. Even the timely migration from the Stacey West will pave the way for that to close next season. At a saving of what – maybe £15k per year. Oooh that’s a quality ‘bums-on-seats player for sure.  How small thinking has the committee club become, that £407 of fund raising is worthy of top story on the club’s official site?  That is not for me to say, as contrary to belief I have put my head on the block too many times and given more than enough facts to back it up. But as certain journalists are well aware libel is a rich man’s game. Poker players know that if you have not got the stake you have to fold, even with a full-house.

Hi Big Barry, absolutely not. When you start questioning validity of answers then you are sailing into dodgy territory without any evidence to back it up. It’s easy for fans to say X,Y,Z are lying and they are doing this, that and the other, but again it boils down to a) having evidence, b) people willing to put their head above the parapet and whistleblow. I remember that during the Keith Alexander saga, the club got wind of some documents that I had got hold of. The next thing I know a fax from the solicitor is on my desk. The editor then decided not to publish said documents. The club have been pretty quick to clampdown on some of the accusations leveled at them and any publisher be it a paper, blog, Twitter, or messageboard is libel.

The question is why mention this when I am subject to a private and confidential line of correspondence  Surely the publication has the financial weight and public duty to get to the bottom of things. Indeed they like the BBC were given the article to which he refers along with the facts. The BBC ran the banning of the 4 on the hour every hour at the time. I was alas gagged.  Further, things could not be further from what the webchat alludes, as the people were willing to back up the facts we supplied with paperwork and articles published elsewhere. Perhaps we should take a leaf out of the tale of Gary Walker.  I may be very much Lincolnshire’s second biggest whistleblower but as undisputed no1 Gary Walker, former chief of United Lincolnshire Hospitals Trust, says a ‘culture of oppression and fear’ has silenced critics

I shall not continue as I have attempted to keep my side of the bargain and will continue to do so.  Perhaps the author of the web chat could do the same.  As I received no fans backing at the time either it all left a taste to be honest. But as we have said, there is no I in team and Lincoln will need that from you all as I have no desire to continue to tarnish my reputation for the merriment and political ambition of a few.

The club has the potential, indeed it is one, that, despite the average wage hereabouts,  exceeds the ambition of every Lincoln City board since the days of John Reames and then far, far back from him to the days of Councillor Bainbridge. Read this, be inspired and hopefully the usual crowd will not derail an attempt to force change before the crowds cross the 1,000 barrier. The need for change is very close I assure you, but  if you act quickly oblivion could still be avoided – but only if you are united and back each other 100%. Genuinely put Lincoln City first for a change, for your children, grandchildren and great grandchildren to comes sake.

So Why Save The Mighty Imps?

When the Mighty Imps were  relegated on that fateful day last May, what could anyone say.  In front of 8,000 witnesses in our own back yard, the spiritual home that is Sincil Bank –  aka The Theatre of the Absurd –  many felt the financial fates, as well as the shadowy non-league realm of Hades, would soon come knocking at our gates.

That kind of crowd suggests we have a future and while Imp blood courses through our veins, we will keep the faith through the losses and the gains.  As long as we at  Save the Mighty Imps have our keyboards we shall champion those that remain of the once proud  Imp Hordes. We will record the losses, the draws, the wins and the virtues and the sins.

We are after all the Mighty Imps not wimps and need just a glimpse for the faithful to return to  a sunnier Sincil Bank, nay Sincil Swank, a heavenly place so rarely full of grace, but  where passion  is always the fashion.

Save the Mighty Imps was a totally independent website written by the fans for the fans, which once worked side by side with the Lincoln City Banter  page on Facebook.

Thanks for reading and thanks for paying for your turnstile click each and every home game. Good luck Imps. Hopefully you will do something proactive soon. You need to as the sands of time are draining and fewer and fewer are prepared to put their necks on the block. 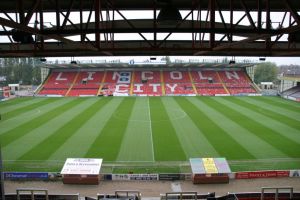 ← 3-1 At Dragons Lair: Trinity Will Dare Not Despair You S4C
Get Your Coat Mr Holdsworth – Simmo & Grant Please →